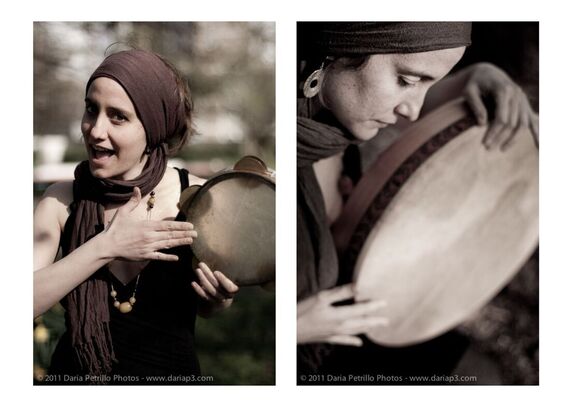 ​Elizabeth Nott didn't quite foresee a career in music until she went on to live in London in 1999.
Back home in Venezuela, where she grew up, Elizabeth took music and piano lessons from a young age,
and classical guitar in her teens; she was also pretty good at the 'cuatro' and recorder.
However, she was mostly interested in reading about the mysteries of life and in drawing...
After three years studying Modern Languages at university
Elizabeth left her studies to travel to England and 'see what happened'.

During a short course in percussion and composition at Morley College in 2001,
Elizabeth re-connected with her passion for music and enrolled in a full-time foundation course in music there.
Discovering Ethnomusicology that year,  she pursued that degree at SOAS (2003-2006)
where she focused on Middle Eastern music and percussion.
Her first mentor was Ahmed Mukthar on darbuka, then Ibrahim Al-miniawi and Tim Garside.

Elizabeth learnt to play riqq, bendir and daf mainly on her own and then developed it more
through various workshops with Rowan Storm, Andrea Piccioni, Yshai Afterman, Glen Velez...

Elizabeth's interest in music teaching draw her close to Dalcroze Eurythmics
which she studied in London for two years. She has also been interested in the South Indian
rhythmical vocalizations "Sulkatu" as a way to developing and understanding rhythm more.
These two methods together with Elizabeth's interest in body percussion,
take an integral part in her music teaching at schools and in workshops she organises every year.
She is also interested in the healing aspects of sound and energy.
She is also Reiki Master and Sound Healing practitioner.

For her promotions and workshops see 'Nottas Productions' page.
An for her DJ adventures go to her MixCloud link below.